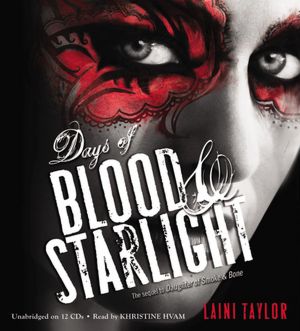 If you have not had the pleasure of reading Daughter of Smoke & Bone, skip this and go out and read it asap. I read it with my ears and it was lovely.

Star-crossed lovers Karou and Akiva were torn apart at the end of Daughter of Smoke & Bone. Karou cannot/ will not forgive Akiva for his part in the slaughter of the chimaera, especially Brimstone and Issa. Nor can Akiva. For his part, he continues his acts of subversion in the Emperor’s war simultaneously mourning Karou’s death and wondering whom the new resurrectionist is and how bands of newly resurrected chimaera are infiltrating seripham outposts.

Karou has formed an uneasy alliance with Thiago and has managed to hide the chimaera in plain sight in a kasbah in northern Africa. Were it not for her magical skills, the chimaera would not be alive, yet they revile her as a traitor. She accepts this verdict as she wallows in guilt over her part in Brimstone and Issa’s deaths.

Meanwhile, back in Prague, Suzanna and Mik continue to be head-over-heels in love and live in Karou’s old apartment but Suz misses Karou terribly and is alternately frantic and furious over Karou’s continued radio silence.

Laini Taylor is masterful in creating a vivid sense of place in both the real world of the deserts of northern Africa and the worlds of the angels and demons.  Her characters both human and non-human are fully fleshed-out creatures with unique and distinct personalities. Many are terrifyingly evil, some endearing, some hysterically funny.

One of the many delights I discovered in Daughter of Smoke and Bone was Laini Taylor’s skill at creating an intense romance without all the angst. Karou remains kick-ass and strong. I was pleasantly surprised to find this sequel was not filled with longing and pining over spilled milk. It’s war. Between Karou and herself, between Karou and Akiva, between Karou and Thiago, between the angels and chimaera, not to mention the shifting alliances within the seraphim. Days of Blood and Starlight is exquisitely violent and bloody. The suspense is ever-present, even suffocating at times. The sense of danger escalates until it bursts bloody in a gut-wrenching, gasp-inducing culmination that was both shocking and inevitable.

Khristine Hvam turned in another flawless performance. Her voice has a dreamy quality that seems perfectly suited for Taylor’s prose. Her accents are delightful as are the variety of voices she chose. I listened to the book over one weekend of a marathon leaf removal. I barely remember the raking, so immersed in Karou’s world was I. I had a mountain of leaves, a clean lawn, aching muscles and the pleasant fuzz that always happens when I adore a book.